Today, members of Liverpool Solidarity Federation held a picket outside two branches of Pizza Hut in Liverpool City Centre. This was in solidarity with members of the Pizza Hut Workers’ Union (part of the IWW) in Sheffield who had called for a nationwide day of action against the company as part of their ongoing dispute with Pizza Hut management over pay, conditions and union recognition. 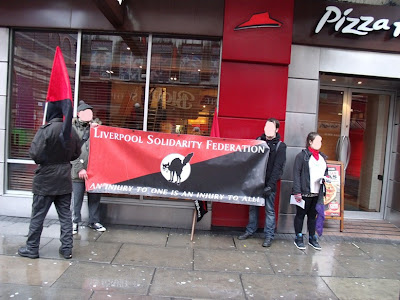 The demands are stated by the union membership as follows:

“In drivers conditions we are demanding regular updates of all moped drivers safety gear. We are also demanding an increase to deliver drivers per-delivery commission, which now stands at 60p, which clearly does not cover costs.

Over pay we are demanding pay increases in line with inflation, as currently our pay is seeing regular decreases. We also that we deserve time and a half for working Bank and National Holiday days. This is industry standard, we are not demanding the earth!

Lastly on the subject of Union Recognition, we believe it is only right as the workers that make the Pizza Hut company what it is we deserve to be talked to on an equal footing to management and have the right for our union to be recognised, giving us all stronger voice.”

We began outside the Pizza Hut in the Liverpool One shopping centre. We started handing out leaflets to passers-by and prospective Pizza Hut customers and were quickly approached by both private security and a PCSO. We were informed that the centre was private property and that we would need to seek permission to hold any demonstration or picket. We informed security of our purpose and questioned the requirement for permission while continuing to hand out leaflets. Eventually, more security arrived and we took the decision to move to the second site ahead of schedule.

On the way to the second site we came across a small group from Occupy Liverpool holding a demonstration outside a Vodafone store. They initially said they would join us at Pizza Hut but split off on the way and we didn’t see them again.

After our arrival at the second site, we distributed several hundred leaflets to members of the public (and some to staff) which laid out the reasons for the action and the demands mentioned above. Several members of the public approached us to ask about the picket. They were interested to know more about the action and the dispute and we were happy to pass on this information.

At one point during the afternoon we were approached by a clearly irate manager of the establishment who was claiming we were driving away customers and had caused her to send staff home as there was no longer any work for them to do. We saw no staff leaving the store while we were stood outside, and if this is policy at this particular store, it demonstrates the attitude of the management towards the staff there perfectly and shows why it is important that workers be in the position to be able to challenge such policies.

I've since read stories of Pizza Hut workers' shifts being altered without notice, promises of training not being delivered on and of the poor attitude of management to workers at Pizza Hut generally, which I believe further justifies action such as that taken up and down the country today. Hopefully the action today will have helped to make Pizza Hut workers around the country aware that they can organize and fight back against such treatment, as well as placing additional pressure on Pizza Hut management in this dispute and we offer our solidarity to the Pizza Hut Workers’ Union in their struggle.